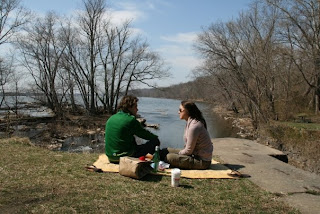 “Why not move to Panama with me and figure something out with our lives?” This question is most likely not one many people get asked by a person they’ve only been dating for a month. I guess it was strange for me to ask him, but at the time, I was scheduled to depart for Panama March 23rd and it was March 20th and I wasn’t quite sure what in the heck I was going to do once I got here or where I was going to live. All I knew was that I wanted to get rid of the emptiness I felt in the States with no opportunity and try to see if I could manage living in another country.

Now, fate has a funny way of working itself out, especially in my life, so about an hour after asking him this question I started shaking uncontrollably and developed a severe fever which turned into a real bad kidney infection. Justin came with me to the Doctor’s office where I was informed that traveling would be out of the question for at least 10 days. At the time I wasn’t really able to think about what to do but knew that I wanted him there with me.

Justin, my semi-boyfriend at the time was living in Connecticut and looking for a job after just coming back from a 7 month journey through Mexico, Central, and South America. He came back in December, 2008 to almost no job opportunity anywhere in the dismal US economy. That same day I was diagnosed with a kidney infection he received news from his only job prospect that he didn’t receive the position he was seeking as a management position with Operation Smile in South America because he didn’t speak Spanish.

His first words after getting off the phone with the Operation Smile representative was, “Well, I guess I’m coming with you to Panama.” Somehow I managed a huge smile in between my convulsions of pain. We departed for Panama April 7, 2007 and we’ve been together since!

After about a month of taking Spanish lessons in Bocas Del Toro (we both didn’t really know the language before moving), we decided we were about ready to start working somehow (money ran out). I thought of a few ideas and knew I wanted to do something in the real estate industry here in Panama. We both agreed we didn’t want to be another salesperson in Panama, there’s enough of those already. We wanted to make our own mark and add a service to an industry that is rapidly growing, rapidly changing, and in need of professional realistic marketing.

What we’ve created is Panama Lens (www.panamalens.com). We provide HD video tours and HDR photography for real estate in and around Panama City. We showcase not only the individual property in a free flowing walk through style, but we also show the surrounding area, the amenities, and give a little taste of what it’s actually like to live in Panama now. After researching this business idea and the market in Panama for a month, we went back to the States, purchased our equipment, came back in July 2009 and have been working ever since.

It’s been a huge learning experience for me and Justin as well. What we’ve learned is that we make a wonderful team. “So he’s the tech, and you are the face,” is what is usually said from most of our clients. We laugh and say sure but it’s more than that. Justin is extremely intelligent with computers, editing, and photography. And with my background in real estate (both my parents are real estate agents in the DC/MD area and have been my whole life. I am a licensed real estate agent as well since 2008 and worked in MD at ReMax for almost a year), I do the research, write the scripts, provide the on camera presence and voice over.

We’ve been really happy with our decision to start a business in Panama. I still can’t figure out why I wanted to move to Panama a year or so ago when I wasn’t with Justin. I get that question a lot and for the most part it’s just that I wanted to try something different, I wasn’t ready for grad school, I wasn’t into moving back to my hometown and continue to search for some kind of job that would give me a so called “purpose” for all that hard work in college nor did I think Justin was into that either.

So here we are, progressing, evolving, and working hard on our baby, Panama Lens. It’s been a fun ride and we have learned an incredible amount about each other. We are a great team and only look forward to the future here in Panama!